Hurricanes, tornadoes, floods, windstorms, and blizzards are all natural disasters that can alter the lives of millions of people. National Vacuum Corp. is prepared to respond to impacted locations with trained personnel and specialized equipment, including vacuum trucks, pressure washers, sewer flushers, pumps, and heavy earth moving equipment. Affected areas can be contained, cleaned up, debris consolidated, remediated, removed, and restored.

In the past, National Vacuum has responded to a variety of natural disasters, such as: 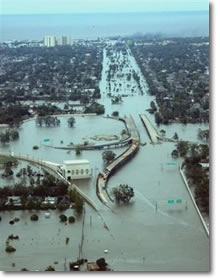 Heavy snow can severely stress roofs. In our Niagara/Buffalo core region, National Vacuum responded to a seven-foot deep snowfall in Buffalo, NY that was causing roofs to collapse throughout the area. Our vacuum trucks were used to clear tons of snow from the roofs of schools and many other private businesses. By keeping removal crew sizes to a minimum, the snow was removed without adding additional stress to already weakened structures.

When the flooding from the aftermath of Hurricane Katrina left sewers in and around New Orleans incapacitated, National Vacuum was there flushing out sewer lines and vacuuming catch basins to assist in the recovery effort for this devastated region.

Other problems that can occur as a result of natural disasters that National Vacuum is ready to respond to include: